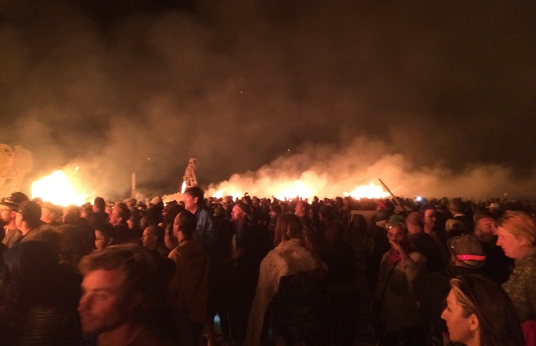 Burning Man has many traditions that have grown from a single event. Early Burn began in 1999, when Peter Mars constructed a 15′ tall stick figure that was used as a central survey marker to layout Black Rock City. The last ring road was 2400′ from the center, so they needed something more visible than a single spike in the ground. 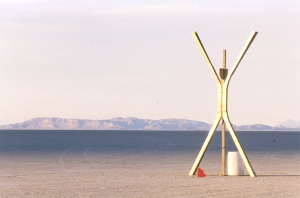 After the city layout was complete, the stick figure needed to be removed and the Man built in its place, so it was decided to burn the figure. For the next couple of years, the process was repeated and the early burn became a celebratory event for the crew to mark the construction progress of city infrastructure. 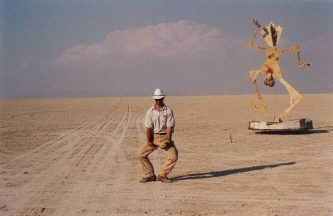 Over time, the size and scale of the Man and the City has increased, but the tradition of building a figure from leftover scrap wood and burning it one week before the Gate opens has become an established tradition. The number of impromptu figures has also increased over the years as various departments added their own contributions. Recent events that occur while the crew is working, have also become the subject matter of artistic expression, some of them quite elaborate. In previous years, the fire crew burned a giant fire extinguisher, the communications crew; a giant radio, the office staff; a larger-than-life desk, complete with actual paperwork and office supplies. 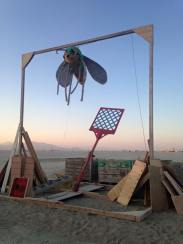 Early Burn 2015 was the largest ever, with more that two dozen burning figures, including a giant bug with flaming flyswatter, a 1/4th size wooden shipping container, a wooden golf cart, and three versions of ChocoTaco, one of them built by the BLM in a fit of participatory humor. 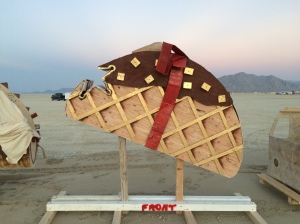 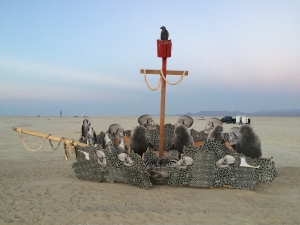 Monkeys & Skulls in a boat -by Mike Garlington. 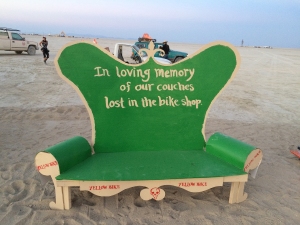 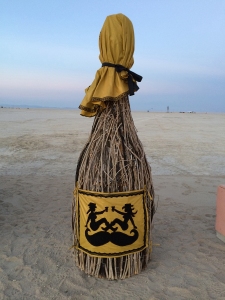 Someone brought 100 ChocoTacos in a cooler to hand out, and 300 people lit sparklers in a moment of silence for Spoono, a beloved crew member who passed away in his sleep the week before. 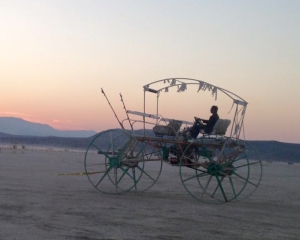 Spoono’s art car was given a place of honor at the burn.

Early Burn is reminiscent of Burning Mans early years. There are no Rangers ringed around this burn. The crew is quite aware that the intensity of the fire will create its own perimeter and the fireworks will explode directly overhead. You assume the risk…

That first Gold Spike in the ground has also become a ceremonial tradition of its own.