On Easter weekend, 2017, several hundred participants converged on a post-apocalyptic landscape, 244 feet below sea level, for a top-secret weekend of art, music, lectures and performance. The event included more than 100 artists and performers, who were on hand to interpret the theme: “The Way the Future Used to Be”- No tickets, no permits, and everything was free.

“For thousands of years, Desert Cahuilla Indians lived here, watching the water come and go, and farming on these banks. But the Salton Sea’s current incarnation began as a mistake. In 1905, the Colorado River, which had been diverted to irrigate local agriculture, overcame its banks and poured full-bore into the desert for two years, until engineers from the Southern Pacific Railroad finally blocked it with tons of riprap. The Alamo and New Rivers continue to drain into the Salton Sea, as does agricultural runoff from the Imperial Valley. Since 1909, the Torres Martinez band of Desert Cahuilla has held the title to ten thousand acres of land that lies on the bottom of the Sea.” -Joni Tevis

After World War II, speculators promoted the Salton Sea as a resort destination. At just sixty miles south of Palm Springs it seemed like a sure bet. Agents brought investors by the busload from Los Angeles to put their money down on tidy lots. Boomtowns like Salton City Beach, Desert Shores, and Bombay Beach grew up along the water’s edge.

But over the next couple of decades, the boom faded, and then the storms hit. Tropical Storm Kathleen in 1976, and then Doreen in 1977, which was the second “hundred-year storm” in two years’ time. This was followed by seven years of heavy rains, which raised the level of the Salton Sea and flooded beach-front property with salty water. Over time, beach-front houses and trailers were reduced to rusted support beams and twists of insulation. Since then, much of the water has evaporated and at the same time, runoff from farms in the Imperial Valley has created a polluted time bomb, which explodes from time to time, as toxic blooms turn the water into the color of beef broth, resulting in massive fish die-offs.

Even birds are not immune, the worst one occurring in 1996, when park rangers worked day and night for a full week, collecting dead pelicans and stuffing them into incinerators. It’s been years since the last die off, but the beach is still littered with mummified fish remains and much of the time, the smell is still in the air.

Today, the town of Bombay Beach is mostly dilapidated doublewides, nine blocks deep and five blocks wide. There are just over a hundred full-time residents, and two bars.

“The festival’s aim is to both take down the art world a notch and take Bombay Beach up a notch.” -Tao Ruspoli

For weeks, the internet was abuzz with rumors of an underground event in SoCal on Easter weekend, which was the same weekend as the nearby Coachella Music Festival. Information about the event was held behind a secret password-protected website. On April 14, 2017, we converged on a place/event called Bombay Beach Biennale. Upon arrival, we procured a hand-drawn map, which detailed events and art which could be experienced over the course of the weekend.

What is not shown on this map is the 15′ high earthen berm that separates the town of Bombay from it’s Beach. This dike was built a while back, to keep the unpredictable Salton Sea on the side of town that’s already been completely destroyed.

Parking as close as I could to the beach, I got out and approached the berm. Protruding behind it was the tip of a large and colorful sail.

When I clambered over the berm, I discovered this 30′ high mast sticking out from the rusted hulk of a flat-bottomed boat. Soft, dreamy music emanated from speakers hidden inside. This was the “Swedish Pavilion”, one of 38 “International Art Pavilions” set up throughout the town.

The second “art installation” I encountered was this massive, 6-wheel drive military truck, recently mired in the beach. FOUNTAIN OF YOUTH RV RESORT was stenciled on the side of the doors.  This vehicle seemed more fitting for a scene from Mad Max, than a resort spa.

It was eventually pulled out by connecting a long chain to a heavy-duty forklift sitting far behind it on more solid ground.

Continuing on to the waters edge, I came upon a small tide-pool filled with sharks.

On a dryer part of the beach was the “Bombay Beach Intergalactic Space Station” made from a salvaged airport control tower.

Resting on 4 legs made of 3/4″ thick steel plate, this interactive work of art was made by artist Randy Polumbo at his studio in Joshua Tree, transported to the Biennale, and then erected with heavy equipment.

Having had some advance notice that this was an art event, and in true Cacophony tradition, I put up my own temporary art installation- a curated group of tee-shirts, which tell the story of a Hero’s Journey.

Once again, it’s a story about a journey and a desert.

And there were couches and a fire barrel on the beach near the DJ station.

A wall of hay bales had been erected between the sound system and the town.

As the day progressed, more and more people showed up. The day was punctuated by the occasional sound of large explosions coming from the military base a few miles away.

Hearing a familiar hum above me, I looked up to see a camera drone flying overhead with a formation of Pelicans high above it. The surreal juxtaposition of these things captured my attention until the drone veered off towards one of the art works further down on the beach.

This years festival was completely free and self-funded. This meant free cocktails, meals and oysters for hundreds. The only money exchanged went to a local BBQ trailer and the Ski Inn, the bar that somehow accommodated everyone, with a local or two helping behind the counter.

Leaving the beach for a stroll thru town.

I grabbed my umbrella and strolled thru town with Brian Doherty, a long time Cacophonist and writer for Reason magazine. Passing golf carts and guys with radios on their belts were indications that we were in the midst of a full-scale event production. We were also passed by decorated bicycles and a guy on motorcycle that looked like a giant stuffed tiger.

The signs of decay were everywhere.

And yet, works of art are flowering in this wasteland.

As I came around a corner, I discovered an installation on a chain link fence, decorated with 1,000 pocket watches- and they are ticking!

This piece was called “Tempus Mortem”, made by Alexander Rose… who is both an artist and the Executive Director of the Long Now Foundation.

In one of the abandoned buildings, stood a red piano, decorated with candles. Jane Maru sat down and played a beautiful piece.

One of the nicest reconstructions, was the Bombay Beach Opera House, designed by artist James Ostrer. Completely refurbished and painted, the walls and ceiling were covered with hundreds of flip-flops, which appear to have been collected from the beach. Trash becomes art.

We were treated to a performance by two members of the San Francisco Ballet Company.  The music track was provided by a live violin player.

The Hermitage Museum, designed by artist Greg Haberny, was another major abandoned house restoration. Once inside, I felt like it could be in downtown Los Angeles or New York City.  (photo by Valentina Ganeva)

X marks the spot of the RGX medical station. I noted that one of my Rangers from the playa was now an EMT for this event.

Groups of well-dressed young people were an indication of this event’s connection with, and proximity to, Los Angeles. And yet, the principle of radical inclusion was clearly illustrated here, as thin fashion models wearing evening gowns and high heels mingled with local retirees and a frumpy old woman with 5 little dogs at her feet.

“While its next-door neighbor Coachella has come to be defined by branding, hashtags and which indigenous headdress one might appropriate, the Bombay Beach Biennale is an experiment in civic engagement.” -LA Weekly

I also also encountered people from Italy, South Africa and a group of Asian tourists with cameras around their necks.

On one of the vacant lots in town, dozens of interesting old cars were hauled in to create the Bombay Beach Drive-In theater.

Preparing for evening, I made a costume change and headed back to the “Bombay Beach Beach Club”- (The Department of Redundancy Department is just down the street.)

A scantily clad bartender at the Beach Club. Kalvin Kline seemed to be the underwear of choice for all the buff guys from LA.

Later on, several movies were shown at the Drive-In on Saturday night, along with all the free popcorn you could eat.

And then, at 3am, they played the Russian movie “Stalker”, which I’m sure was a nod to the historical significance of the Cacophony Zone Trip that brought Burning Man to the desert in 1990.

Exploring Bombay Beach Biennale at night was a delight.

Out behind the Opera House, a golden boat sits in the middle of a yard covered with decorative rock.

It was like being in another world. Or perhaps a similar world that we know well. At one point during the night, Miss Dusty and I set up an impromptu bar in the street and handed out cocktails till we ran out of cups.

On Sunday morning, a lone Benz rests in the shade of an abandoned house.

I found that gifting, decommodification, radical inclusion, civic responsibility and participation were all a part of this years Bombay Beach Biennale.

Leave No Trace is a relative term in this decayed wasteland of rusting cars, trash-filled yards and burned-out buildings. What BBB2017 has left behind is several repainted abandoned houses, many works of art and new hope for a community. 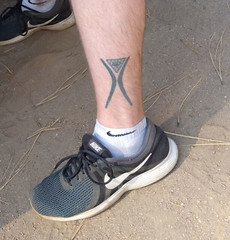 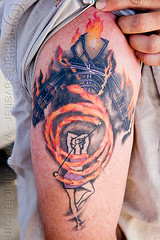