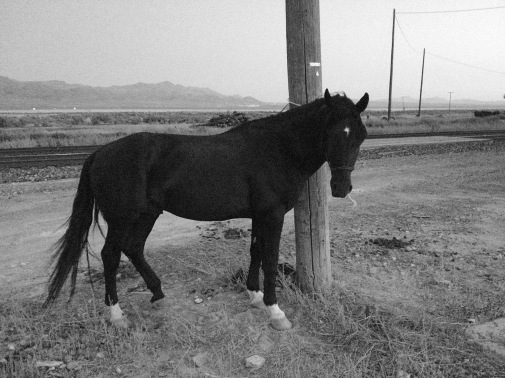 It’s been a long time since I’ve seen a horse in the town of Gerlach. Not more than half a dozen in the past 10 years and those were on the outskirts of town, along 34. 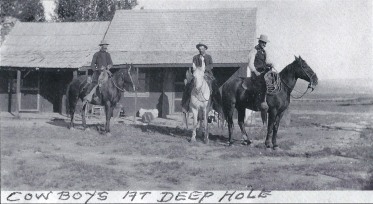 The Deep Hole Ranch was owned by Louis Gerlach

There used to be a lot more cattle ranching in the Black Rock basin surrounding the town of Gerlach, that was before the giant water-hungry farming operations came in and, over the last four decades, managed to drop the water table 50 feet.

A few years ago, I got to view one of the locals old 8mm home-movies of the Gerlach rodeos that used to take place during the early 1950s.

You can still find the remains of the rodeo corral on the south side of the railroad tracks, across from where the water tower is. Back then, there were two water towers and Main street was just a gravel road, which continued to be gravel all the way to Wadsworth. Main Street was finally paved in 1963.

During the era of big cattle ranches, there were lots of horses and lots of cowboys and even more bars in the town of Gerlach. In 1950, you could still find hitching posts in front of the bars and it was not unusual for a drunken cowboy to ride his horse into the bar and demand another drink, with exception of maybe the Longhorn Saloon, where Bruno worked as a bartender and didn’t put up with such foolishness. That was a few years before he bought the bar and changed the name to Brunos.

Nowadays, you might occasionally find a few cowboys who drop into Gerlach for a drink, but they arrive in pickup trucks, so you can imagine my amazement one late afternoon a couple weeks after the 2014 burn, when I’m walking down Main Street and I see this black horse tied to a utility pole down by the railroad tracks near the old train station. What’s more, a few paces from the horse, I could see a western saddle with a bedroll slung over the handrail by the station.

On rare occasions, someone might ride a horse thru Gerlach, but nobody ‘parks’ a horse in Gerlach anymore. My curiosity peaked, I walked down the embankment and strolled over towards this black horse. I know a little bit about horses, having grown up in Texas and now have fond memories as a teenager out at my grandfathers farm during the summer, where I would go out to the pasture, grab the mane of one of the horses, launch myself onto its back and then have it lurch forward at full gallop… no saddle, no reins, no shoes, no shirt. I remember the oneness that we were in that moment and the soft jolt of each hoof and the wind and the smell of horse.

As I closed the gap between me and this dark creature, it was apparent that this magnificent beast was one of the finest examples of horseflesh that I had ever seen. It was a young stud, about 8 years old with a long, silky mane, a small white dot on the forehead and eyes as black as coal. As I walked slowly towards him, his ears perked forward, and with a look of fearless curiosity, he took a step towards me, as much as his tether would allow.

It was then I noticed the small, open bag of oats that had been carefully placed out of his reach by his now absentee rider. I scooped up a small handful and thrust out my hand, palm up, under his nose and he nibbled away delightfully. I did a 360 looking around for the owner, realizing I had probably done the equivalent of leaning on a strangers pickup truck without first asking.

I really wanted to know the story behind this apparent anachronism, so I set out to find the cowboy who rode this black horse into town. In all the years of coming to Gerlach, the one thing I’ve learned is what everyone does when they first hit town: stop at Brunos. So I made a beeline over there.

I opened the door of Brunos, stepped inside the bar and scanned around for anything that seemed out of place. I looked over a line of patrons at the bar to my right and at the mostly empty tables to my left. Finally I noticed an odd and solitary figure sitting in a chair, alone at the very back wall. My brain immediately registered: Amish!

As I walked directly towards him, I noted the key Amish indicators; straw hat with a flat brim, wide suspenders and boots with laces. He seemed to be about 30 years in age. When the distance closed, I noted some irregularities; his jet-black hair spilling past his collar was a little too long for Amish, his red suspenders were attached to his pants, not with buttons, but the suspender loops were tied to the belt loops of his jeans with strips of rawhide. I stopped at a polite distance as he tilted his head back and our eyes met. His eyes were Asian!

I realized that I had stumbled across some kind of hybrid western buckaroo. Now there is quite a bit of difference between a southwestern cowboy and a buckaroo. A buckaroo is derived from the Spanish vaquero horsemen and are indigenous to the Great Basin and Central California region. Buckaroos are what you call real cowboys in Nevada.

I introduced myself and told him that I assumed that the black horse was his and that I wanted to know what his story was. He said that his name was Steve Ikeda. His father was Japanese and his mother was French. His great grandparents were interred at Manzanar during WWII and almost lost their family farm, but an American neighbor worked their farm growing fruit and vegetables to pay the mortgage until they got out after the war. Steve grew up near Sacramento and worked cows and horses for a living. The black horse was part of a small herd that ran wild on a neglected 75-acre ranch. The horse was given to him by the ranch owner, but he had to rope it and break it, which he did just a few months ago. Recently, he had been offered a job on a ranch near Winnemucca, so he was now riding his horse from Sacramento to Winnemucca, a distance of about 300 miles. He was making a brief stop in Gerlach and then riding on to Frog Pond, where he was going to spend the night. I’m thinking just wow, this guy is the real thing.

I wished him well on his journey and walked out of the bar. The next morning, I noticed hoof prints in the yard next to the Gerlach Burning Man office. Apparently he rode into the yard, got water from the faucet and left for Frog Pond. I did some research a couple weeks later and discovered that the Ikeda family grew and prospered after the war. In 1970 they opened a fruit stand near Sacramento. In the 1980s they begin making pies from the fruit that grew in their orchards. Now I like to stop at Ikeda’s Country Market just off I-80 in Auburn, CA. Probably the best pies I’ve ever tasted.

And this was on the playa that year: